The Construction Environmental Management Plan was approved at the end of September and number of  pre-construction activities have been undertaken with limit of works pegs surveyed, tree removal signs erected, the archaeological survey of the historical railway alignment and translocation of the Golden Sun Moth larvae has been completed.

Construction work commenced at the beginning of October on the first stage of works that are required for the utility service relocations.  Variable message signs have been installed at both ends of Dudley Street, together with construction warning and vehicle movement signs and site fencing.

The tree removal work was largely complete by mid October and a detour path has been constructed for part of the Uriarra track to enable pedestrians and cyclists to continue to use the track.

The overhead high voltage electricity line from Cotter Road will also be undergrounded in October, that is the section between the Horse Paddocks and Dudley Street.  Utility service relocations will be undertaken for the water main, gas and telecommunications.  Earthworks activities will commence once this first stage of works has been completed.

In regard to the signalisation of the intersections at the Kent Street Bridge, the plans for the project have not yet been released for community consultation and a contractor has not been appointed.

Following an unsuccessful appeal to ACAT by a third party, a contractor has been appointed and all approval
processes have been finalised, so construction is expected to commence in July or August 2020.

The preferred tenderer for the redevelopment of the Canberra Brickworks was announced in June 2017.  The development will provide a maximum of 380 dwellings, various commercial enterprises and re-purposing of the heritage listed buildings.  The development requires the construction of an additional, new, access road that will connect the Brickworks to Dudley Street.  The ACT Government went through the formal legal processes for approval of its plans for the access road and an associated “upgrade” to Dudley Street.  These formal processes were complete, and all necessary approvals were in place by April 2019. These include Commonwealth Government EPBC Act approval for offsets to be used for the destruction of endangered species Golden Sun Moth and Natural Temperate Grasslands habitat, and Works Approval from the National Capital Authority.

Over the two year period the YRA comprehensively engaged with the ACT Government on these proposals and raised many concerns and asked for a number of specific actions – but the plans were not moderated in any way. 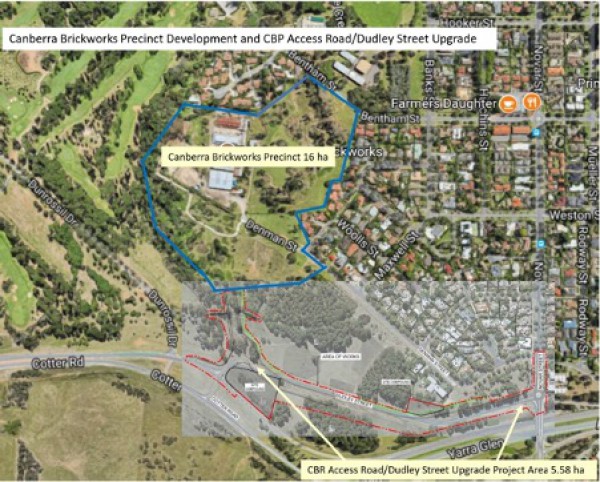 The YRA is on record as being opposed to the ACT government’s proposal to upgrade Dudley Street, which we consider to be funds that could be better spent elsewhere. We also object to the Environment Minister’s approval of the proposed environmental impact (the habitat for the critically endangered Golden Sun Moth and Native Temperate Grasslands). The YRA has continued to put pressure on the ACT government to address the issue of congestion at the intersection of Novar Street and Dudley Street before any upgrade to Dudley Street. While we have not stipulated a remedy, we are pleased to hear that the ACT government has started work on designing a solution for the intersection.

Regardless of the final design of the Novar Street/ Dudley Street intersection (which the YRA has not yet seen), we do not believe the Dudley Street upgrade will address the fundamental issue of the increasing traffic on Dudley Street from the Cotter Road and new Molonglo suburbs, much of which is headed towards Deakin, will be addressed until there is construction of the long talked about Mint Interchange.

The Dudley Street upgrade is being proposed as works associated with the development of the Canberra Brickworks Precinct. Dudley Street is already over capacity at morning and afternoon peak times, carrying some 10,000 vehicles per day. At peak times the traffic is bumper to bumper along the full 800 metres of the street with the vast majority of vehicles not seeking to  access Yarralumla but using Dudley Street to access West Deakin. An additional 2,500 vehicle movements per day are forecast for Dudley Street once the Canberra Brickworks Precinct is activated, but the upgrade, while bringing the road up to current standards, does not provide any additional capacity as it remains one lane in each direction.

This is based on the need to avoid the congestion that would arise if the main entry were from Bentham or Denman Streets or if it were possible to access these streets from the new Brickworks Access Road.

The YRA is on record as supporting the construction of this road ahead of the development of the Canberra Brickworks Precinct to ensure most construction vehicles and equipment enter the site from this road. However, the YRA objects to two aspects of the design:

Pedal Power and other community groups have asserted that traffic lights would be better for pedestrians and cyclists. Traffic lights would not take up as much space thereby reducing the environmental impact. We doubt the veracity of traffic projections and anticipate there will be congestion in the vicinity of the roundabout.

The YRA and other community groups have for many years advocated for the prioritisation of pedestrians and cyclists over vehicles. Suggestions for a bridge or tunnel were rejected due to their costs, yet no such rationale has been given for rejecting a wombat crossing (raised pavement) that would signal to drivers that they need to slow for pedestrians and cyclists. This remains a safety issue and the YRA will push for retrofitting the road if such plans are not incorporated in the original design.

The area in the vicinity of the Yarralumla Uniting Church and in the open areas that extend to Dunrossil Drive are home to the critically endangered Golden Sun Moth and Natural Temperate Grasslands. The area has been subject to numerous surveys over many years. Based on surveys commissioned by the ACT Government, the Golden Sun Moth habitat in this area appears to have increased almost 3‐fold in 3 years, from 2.5 ha in 2014 to 7.39 ha in 2017. The area of Natural Temperate Grassland is reportedly 0.75 ha. 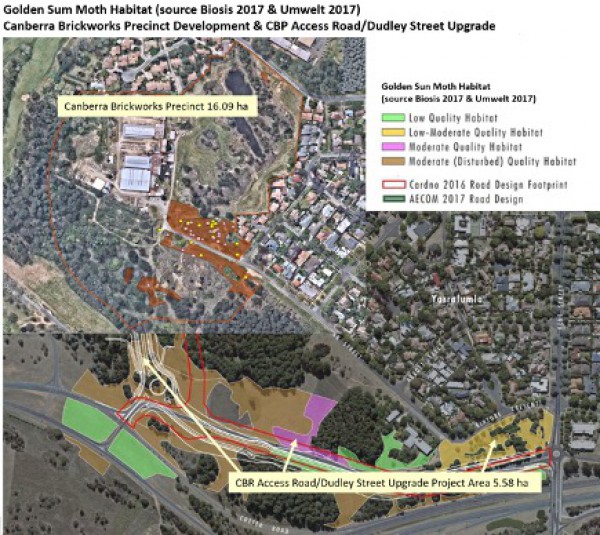 The YRA is disappointed that the Environment Minister chose to approve an application from the ACT Government to upgrade Dudley Street and build a new Brickworks Access Road that will together destroy 43% of the Golden Sun Moth habitat and 17% of the Natural Temperate Grassland.

Although an offset site has been approved, this is not a 100% offset as statutorily required. The obligation placed on the ACT Government for the shortfall is one year of monitoring at the existing site with no further remediation required.